Veteran shipping and logistics journalist and podcaster Mike King is hoping to raise $15,000 for an international seafarers’ welfare charity by hiking 200 miles ‘Sea-to-Sea’ in June.

The creator and host of The Loadstar Podcast, and contributor to multiple shipping and logistics publications over the last 20+ years, Mike will walk the historic ‘Offa’s Dyke’, from the Severn Estuary in South Wales to the Irish Sea coast in north Wales.

Starting this June, the trek will take over ten days to complete. He will be walking on behalf of UK-based charity the International Seafarers’ Welfare and Assistance Network (ISWAN), which has assisted almost 12,000 seafarers and their families and awarded direct grants totalling over $140,000.

Mike was motivated to raise money for seafarers after seeing them treated so poorly during the Covid-19 pandemic when so many were stuck on ships for so long.

“I thought the treatment of these crews was abhorrent to be absolutely honest,” he said. “So many were stuck onboard ships for longer than a year and, really, hardly anybody outside the industry cared. Then they couldn’t get vaccines so they still couldn’t return home. It’s a disgrace when these are the people who transport all the energy and food on which we all rely. And all the luxuries we don’t really need but ordered anyway during lockdowns.

“And now we’ve got the war in Ukraine which has trapped hundreds more seafarers in the Black Sea. Again, they are the forgotten victims,” he said. “I’m hoping some of the ship owners and managers or other people in the logistics world I’ve interviewed over the years might help support this fundraiser.”

Donations can be made at www.justgiving.com/fundraising/200milesseatosea

ISWAN was chosen as the designated charity after King asked some of his most trusted shipping contacts and journalism colleagues for recommendations.

“The message I received back was they are the best out there,” he said. “They provide brilliant helplines for seafarers. Some of the funds will also go towards ISWAN’s Ukraine Crisis Support Fund [www.seafarerswelfare.org/relief-funds/ukraine-crisis-support-fund] which gives small grants to seafarers and their families of any nationality who have been impacted by the Ukraine crisis and need immediate and urgent financial support.”

Simon Grainge, ISWAN’s Chief Executive, said: “We are very grateful to Mike for choosing to support ISWAN as he takes on this challenge. While many seafarers are still enduring the impacts of the COVID-19 pandemic, the crisis in Ukraine presents a new ordeal for crew members and their families affected by the conflict. Every donation makes a difference, enabling us to give financial help to those in desperate need and to provide a listening ear and support to those who are struggling through our SeafarerHelp helpline.”

Mike recently interviewed a survivor of the February missile attack by Russia on the Namura Queen in the Black Sea for The Loadstar Podcast. “It really struck me not only how much danger seafarers face, but also how long some of these guys have been at sea. My interviewee had had a close escape. It really sounded terrifying, and my heart goes out to those stuck there still.”

Offa’s Dyke is an earthwork running from ‘Sea-to-Sea’ which is thought to have been constructed in the 8th century on the orders of King Offa of Mercia to subdue the Welsh.

Mike will be joined on the hike by childhood friend Norman Long. The two will carry all their kit with them and pay all their own costs.

“Norman is confident in his navigation skills which is a good thing because I don’t know one end of a compass from the other,” said Mike. “If it’s left to me, we’ll be walking 300 miles.” 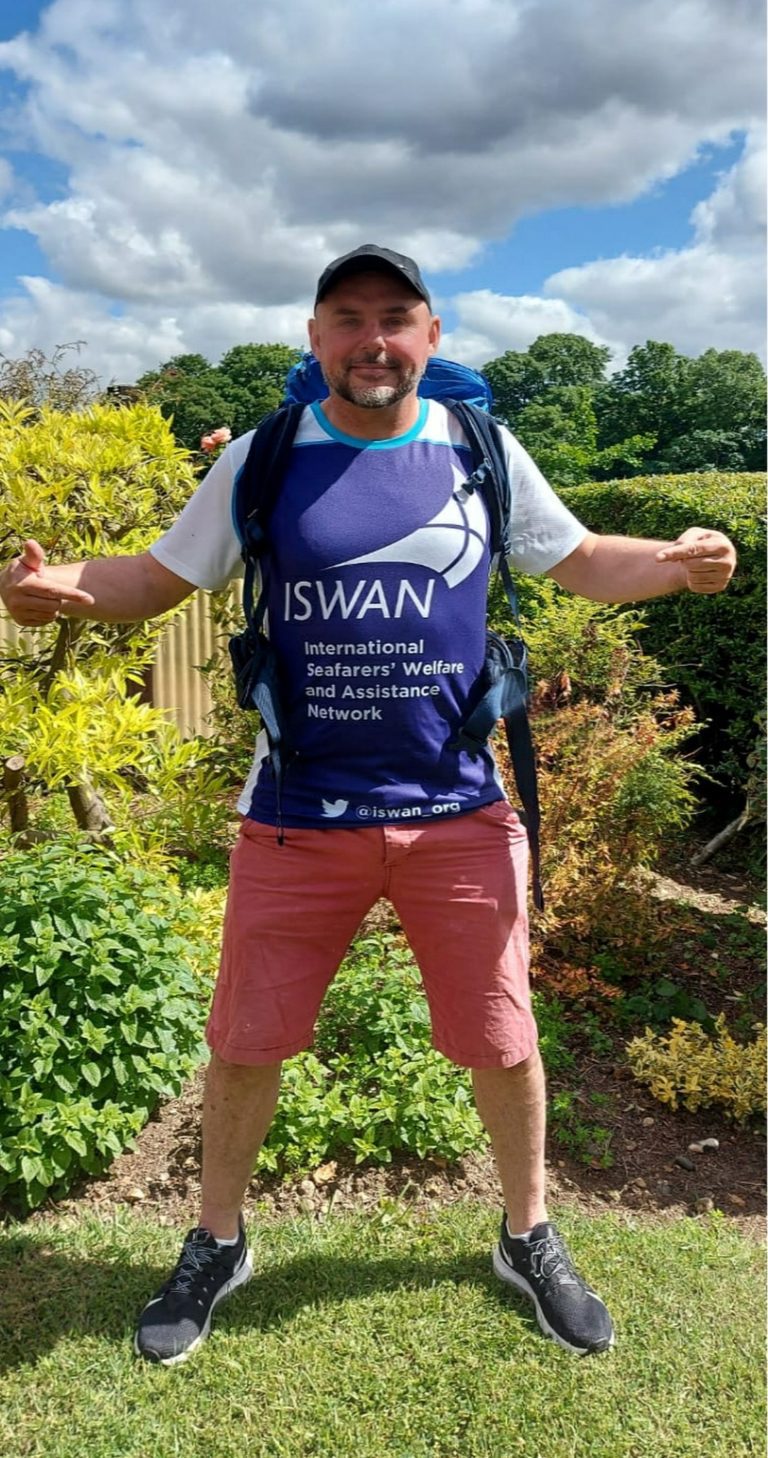 Mike King is hoping to raise $15,000 for an international seafarers’ welfare charity by hiking 200 miles ‘Sea-to-Sea’ in June.

The International Seafarers’ Welfare and Assistance Network (ISWAN) is an international maritime charity which works to improve the lives of seafarers and their families with services, resources, strategies and advocacy. https://www.seafarerswelfare.org/

About the Ukraine Crisis Support Fund:

The Ukraine Crisis Support Fund is a small grants fund for seafarers and their families of any nationality who have been impacted by the Ukraine crisis and need immediate and urgent financial support. The fund was launched in March 2022 and is being managed by the International Seafarers’ Welfare and Assistance Network (ISWAN) on behalf of the Seafarers International Relief Fund (SIRF). It can provide one-time financial grants of up to US$500 to seafarers and their families in need to help with expenses including medical bills, living costs, or emergency travel. It can also provide compensation of up to US$1,000 to next of kin if a seafarer has died as a direct consequence of the Ukraine crisis.

SeafarerHelp is ISWAN’s free, confidential helpline which provides support and assistance to seafarers and their families of any nationality, anywhere in the world. The helpline team speaks a number of languages and the helpline is available 24 hours a day, 365 days a year. www.seafarerswelfare.org/our-work/seafarerhelp