Thordon Bearings’ authorized distributor in Mexico, TZ Industrias, has secured an order to supply the Canadian company’s TG100 shaft seals, equipped with a safe return to port (SRTP) emergency seal, to a quartet of shrimpers operated by Pesquera Axel, one of the country’s leading fishing vessel operators.

The scope of supply also includes Thordon’s seawater lubricated SXL tailshaft bearings and grease-free ThorPlas-Blue bearings, of which the latter will be installed to each of the vessels’ rudders and winches.

Edgar Perez, Managing Director, Pesquera Axel, said: “We became very interested in Thordon’s TG100 tailshaft seal when we heard about its safe return to port function. With a fleet of 72 fishing vessels operating in some difficult marine environments, the safety of our crew and vessels is of the utmost importance.”

Arturo Selvas, Managing Director, TZ Industrias, said: “Fishing vessel and crew safety is very important in Mazatlán right now. There have been a number of incidents where Mazatlán-based fishing vessels have taken on water or sank. In April, for instance, a tuna fishing vessel sank, and in April 2021 a shrimp boat collided with a ferry off Topolobampo, Sinaloa.

“Fishing vessel operators want a seal with an emergency function capable of preventing water ingress, but they also want a seal that’s reliable, effective and low maintenance. The TG100 is widely seen as offering a greater level of redundancy while delivering greater reliability and maintainability compared to other mechanical seals on the market.”

Pesquera Axel, a new customer for Thordon Bearings, has joined a growing number of fishing companies to have converted their vessels’ tailshaft seals and bearings to Thordon’s environmentally safe alternative.

Last year, TZ Industrias and Thordon began converting all the shrimp vessels in the Pesca Industrial Maros fleet to TG100.

Jason Perry, Thordon’s Regional Manager for North America, said: “This latest order underpins the increasing interest for Thordon technology among the fisheries of Mazatlán. Changing to a Thordon TG100 emergency seal is the optimum solution for vessel safety. It has an excellent performance record with hundreds of units now in service. It really is an important component to vessel safety, protecting not only the lives of the crew but also the vessel.” 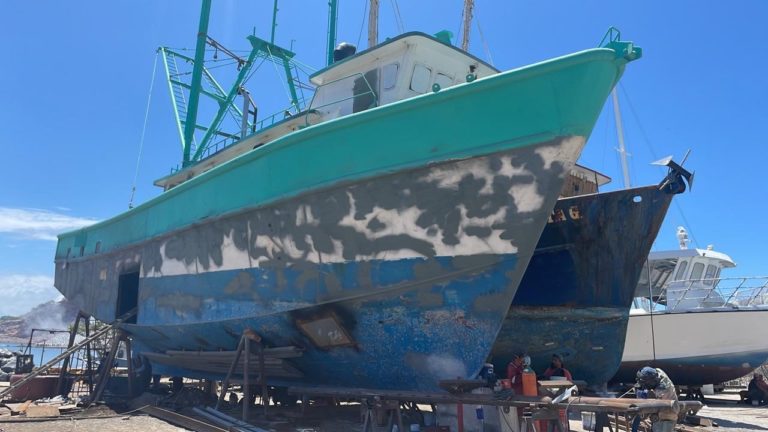 The Judilily is now fitted with TG100 shaft seals

The Thordon TG100 is a mechanical face seal designed specifically for 86mm (3.375in) to 305mm (12in) shaft vessels operating in either clean or abrasive-laden waters including workboats, harbour tugs, offshore supply vessels, yachts, ferries, fishing trawlers and self-propelled dredgers.

The TG100 should require no periodic maintenance or spare parts within a five-year drydocking cycle. An additional “water port” allows for cleaning/flushing of dirt and abrasives deposited in the bellows over time.

Thordon Bearings designs and manufactures a complete range of journal bearing and seal systems for marine, clean power generation, pump and other industrial markets. The bearing systems are manufactured using Thordon proprietary non-metallic polymer materials that are lubricated with water eliminating oil or grease usage, meaning ZERO risk of oil pollution to our rivers, lakes and oceans and elimination of lubricant costs.  Thordon systems and bearings are available worldwide through over 70 agents and distributors.