Survitec’s Seahaven, the world’s largest inflatable lifeboat, has completed the International Maritime Organization (IMO) A.520 physical tests as required by classification society Lloyd’s Register and will officially launch to the cruise industry tomorrow.

The award-winning 1,060-capacity inflatable lifeboat solution for cruise vessels successfully completed the stringent tests, including ship sinking scenarios and a timed evacuation, which was achieved in less than 22 minutes. Under International Convention for the Safety of Life at Sea (SOLAS) rules, evacuation should not exceed 30 minutes.

The A.520 tests follow the December 2021 success of Heavy Weather Sea Trials (HWST), carried out in line with SOLAS requirements for Novel Appliances. The rigorous trials saw Seahaven deployed from EDT Jane, an 80m offshore support vessel, with representatives from Class and observers from UK MCA in attendance.

During the A.520 tests, conditions were created to those that seafarers and passengers would encounter in a real-life evacuation. Seahaven is unusual in that it is the first lifeboat to have been through, and continues to go through, an exhaustive reliability testing programme that far exceeds the testing requirements set out by SOLAS.

“In keeping with our long-standing and over-arching commitment to safety, Survitec has continuously delivered innovative Survival Technology that meet the needs of cruise ships not just for today but well into the future. Our multi-faceted testing programme exceeds the SOLAS statutory requirements and proves Seahaven is reliable and more importantly safer than current evacuation arrangements,” said Claude Sada, Managing Director Survitec Survival Craft.

“With Seahaven, we have taken all the safety features, testing and type approval processes associated with lifeboats and MES to solve the challenge of being able to evacuate growing numbers of passengers quickly, safely and comfortably,” McCormick said.

Seahaven launches with the push of a button and automatically inflates, taking just four minutes to deploy. The revolutionary slide-based Survival Technology solution has improved passenger evacuation time without compromising on safety. Once deployed, the inflatable lifeboat can travel independently for 24 hours at a speed of six knots.

Seahaven provides the opportunity for cruise-ship owners to reimagine the passenger experience by unlocking up to 85% of deck space.

Survitec began developing the solution following its early involvement with the EU-led and -funded Safedor project, which worked with classification societies, operators and flag states to integrate safety as a design objective into ship design and risk assessment into approval frameworks. The recent tests and sea trials represent the culmination of this process for the company.

Seahaven will launch to the cruise ship industry during the Seatrade Cruise Global trade fair, which is taking place in Miami, Florida between 25-28th April. 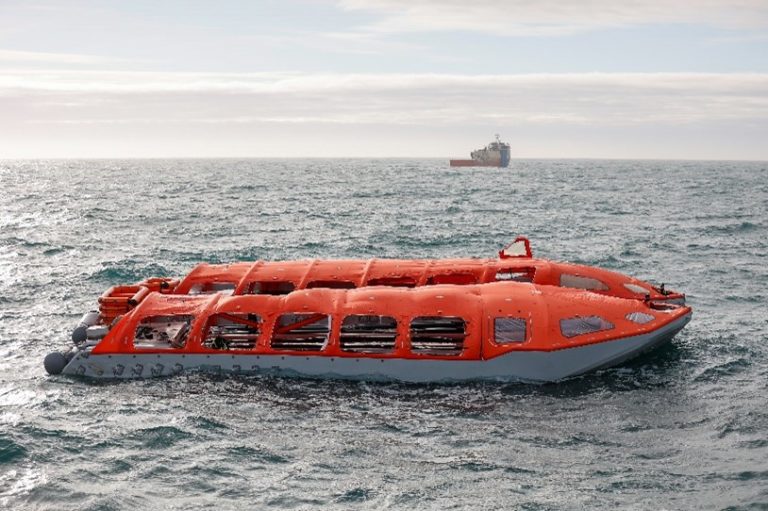 Seahaven is a unique inflatable lifeboat system providing helical (spiral) slide-based evacuation from large passenger vessels. Its innovative design increases available deck space by up to 85%, making it appealing to ship designers, architects and operators looking to fit more into the limited space available onboard passenger ships. Because the system eliminates the need to locate lifeboats in conventional locations on the port and starboard waists of a ship, it introduces flexibility for designers to introduce more cabins and other amenities. Deployment can be achieved within four minutes at the touch of a switch instead of using davits, while multiple slides make access easier for mobility-impaired passengers and enable evacuation of family groups. The self-propelled evacuation system is accessed by high-pressure inflatable slides and can be stowed in a rigid pod alongside the ship. It is also the largest-capacity evacuation system currently available, with each of its two units able to carry 530 people. Once launched, it can travel independently at six knots for 24 hours.

Seahaven has already caught the attention of the global maritime industry, having won the Best Emerging Safety Solution Award at the IHS Markit Safety at Sea Awards 2019.

Survitec is a global leader in survival and safety solutions to the maritime, defence & government, aerospace and energy markets. Survitec has over 3,000 employees worldwide covering eight manufacturing facilities, 15 offshore support centres and over 70 owned service centres. It is further supported by a network of over 410 3rd party service centres and distributors. Survitec has received Z-17 approval as a class-approved service provider from seven major classification societies, and also has ISO 9001 certification, the international standard for quality management systems. Throughout its 168-year history, Survitec has remained at the forefront of innovation, design and application engineering and is the trusted name when it comes to critical safety and survival solutions.