Global Survival Technology specialist Survitec has unveiled a smaller and lighter single seat liferaft (SSLR) to better equip military fast jet pilots on more challenging missions or when forced to eject from their aircraft over water.

The Micro SSLR has been developed in response to increased requirements for a lighter and compact liferaft, resulting in a 20% reduction in weight. The liferaft has over 50% less packed volume than existing market products and as a result the pilot’s personal survival pack (PSP) has additional room available for mission-critical equipment.

Designed to form a critical component of a fighter pilot’s ejection seat, the Micro SSLR is created from the latest generation of advanced lightweight coated fabrics with an inflatable canopy and floor for maximum buoyancy and thermal insulation.

Additional features include a transparent visor, external handles to aid boarding, an internal equipment pocket for essential survival aids, a sea light mounting point and a PLB antenna sleeve in the canopy.

Continuous advances in fighter jet technology and the expansion of the operational envelope, such as in-flight refuelling, mean frontline aircraft can be operating over water, further from base and at higher altitudes, for much longer periods. Therefore, the range of survival equipment in the pilot’s PSP has also grown, making space and weight key considerations vitally important.

Survitec, which supports three-quarters of the world’s fast jet platforms, has also developed a carry-on version of the Micro SSLR for other military aircraft types, including transporters and helicopters.

David Stelling, Category Manager, Survitec Defence & Aerospace, said: “The new Micro SSLR builds on our extensive experience and research in this sector to reveal a more compact, lightweight and robust liferaft. The liferaft has zero-maintenance capability delivering improved reliability and significantly reducing cost of ownership throughout the product’s life. After extensive seakeeping and performance trials the liferaft is now available for all existing fast jet platforms, as well as new, emerging 6th generation fast jet programmes.”

During flight the pilot is attached to the PSP, which is placed in the seat. In the event of an ejection from the aircraft, the ejection seat drops away and the PSP remains attached to the pilot and can be opened after landing in water. Once the pilot has boarded the Micro SSLR, the pilot can use the various survival aids provided including a personal locator beacon to indicate their location to rescue forces.

“The most important immediate part of the pilot’s survival is finding shelter in the Micro SSLR before signalling their location so they can be found and quickly rescued. In the event a fast pilot does have to eject over water, the new Micro SSLR system gives them the best chance of survival.”

Survitec’s Aerospace & Defence team will be showcasing and demonstrating the Micro SSLR at the World Defense Show in Riyadh, Saudi Arabia at Booth G4.1 from 6-9 March 2022. 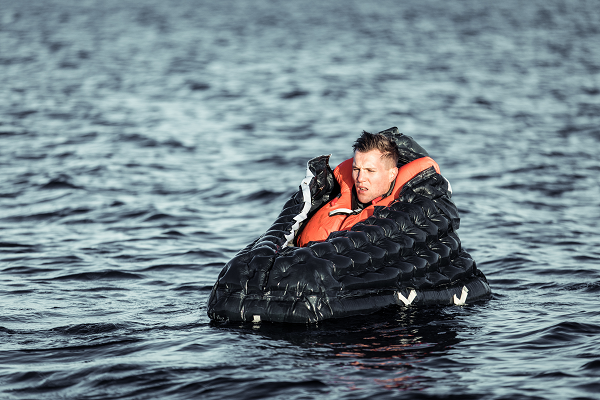