After full application of AQUATERRAS to a pair of cruise ships in early 2019 and 2020, followed in mid-2020 by subsequent pandemic-enforced 18-month anchorage, in-water inspections in late 2021 found their hulls were in conditions that exceeded expectations.

Photographs taken of the coating on hulls on other cruise ships, bulkers, tankers and containerships laid up in the Philippines, Bahamas, La Spezia and the Sea of Marmara – areas known as being particularly challenging – also showed areas of “excellent antifouling performance”.

“Prior to the Covid-19 outbreak, we had two full hull AQUATERRAS applications on cruise ships,” said John Drew, Director, Nippon Paint Marine in Europe. “Now, demand is growing, and we have had to increase production to meet that demand.”

The biocide free coating was introduced to the market in November 2017.

Typically, antifouling paints rely on a certain amount of ship movement to kick-start their fouling control mechanisms. During the pandemic cruise ships set to sea or left their moorings only to make fresh water, which did not provide enough operational activity to activate the antifouling process. That leads to the risk of fouling, especially in warmer waters,” he said.

Ships coated with silicone-based paints, hard coatings and regular SPCs (Self-Polishing Coatings), including the company’s own top-performing A-LF-Sea range, were unable to compete with the performance of the AQUATERRAS coated hulls. Extensive growth build up was often commonplace during the Covid hiatus.

“Some cruise ships had so much fouling when they started operating again that they suffered vibration as well as significant drag and excess fuel-consumption. However, despite extensive idling and static operation in warm and temperate waters, this coating kept the hulls of these ships extremely clean,” said Drew.

With some big players in the cruise sector rolling out technology upgrades to reduce fuel consumption and carbon emissions, the coating is seen as being very much part of a shipowner’s emissions abatement strategy.

“One major cruise line underwent stringent test programmes for over four years before its first ship’s hull was fully applied with the coating,” affirmed Niko Yamanoue, General Manager, Nippon Paint Maine (Europe). “In-service performance monitoring gave the operator confidence to apply AQUATERRAS another ship just before the pandemic hit. It kept the hull clean even during the biofouling challenges of the pandemic.”

Aside from the fuel and emissions reducing potential from a ship with zero fouling, what is particularly remarkable about the performance of the self-polishing paint is that it contains no active biocides.

Johan Wilckens, Managing Director, Nippon Paint Marine (Europe), said: “It has an extremely smooth and glossy finish.  It’s much easier to apply than a silicone but its smoothness, self-polishing and resistance to fouling combine to lower hull friction. The Covid pandemic has proven the coating’s performance even in static conditions.  The product goes beyond compliance but also its performance goes beyond our expectations.

“We anticipate it will become the benchmark eco-friendly antifouling, allowing ship-owners to reduce underwater cleaning, save fuel, lower carbon emissions and mitigate the ecological damage from biofouling and species migration. The technology in this coating is way ahead of its time. AQUATERRAS gives us a ten-year head start on the competition.”

In addition to a number of major cruise brands that are specifying antifouling for application to a number of vessels this year, the self-polishing coating is being viewed with interest by some of the world’s largest container lines and navies.

According to Wilckens, there are several navies currently carrying out static and dynamic tests as the operational requirement of naval vessels means they are often idle or alongside for extended periods.

“Just like commercial vessels, naval vessels need to keep their hulls are clean otherwise they could be prevented from entering territorial waters, ports and harbours for environmental reasons. Other ship types, such as containerships, will follow.”

Until then, the cruise sector looks set to continue to lead the way and invest in biocide free antifouling technology.

“It can give those early adopters the edge in a hugely competitive sector,” said Wilckens.  “It not only strengthens their green credentials but illuminates the way forward for operators of other vessels across all maritime sectors.”

Representatives from Nippon Paint Marine (Europe) will be available to go through the commercial and environmental benefits of the coating and other solutions on Stand 204, in Hall B5 of the SMM trade fair, which takes place in Hamburg between 6th and 9th September.

To arrange a 1-2-1 media interview at SMM please contact pwheater@seabornecommecomms.com 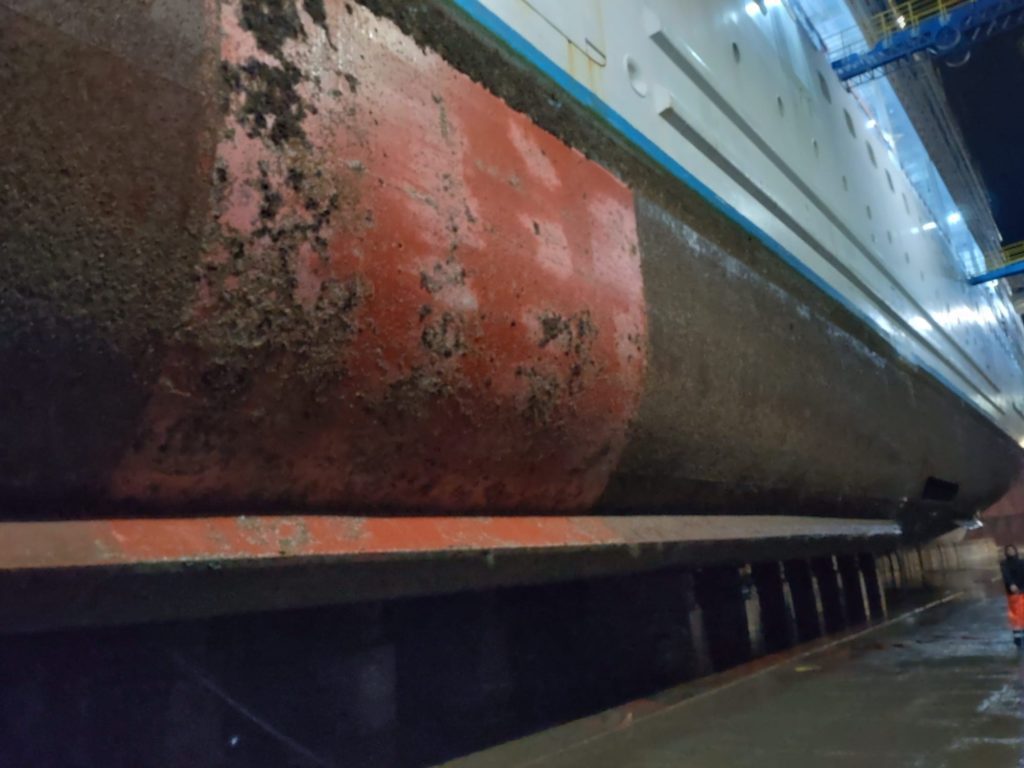 An AQUATERRAS test patch on an SPC coated cruise ship after 20 months idle off La Spezia, Italy.  Note the near-zero fouling on the patch