Winning a Gold Export Tower in the US$10 million export category marks the second year running the coatings manufacture has taken home an award. In 2019, Nippon Paint Marine came runner up, winning a silver tower.

President Moon said: “This year has been hard for everyone. International commodity traders have also suffered many difficulties under unprecedented circumstances. However, the Republic of Korea’s trade has demonstrated its potential once again.

“We have turned our exports back into positive territory faster than other countries. The miraculous resilience of our exports – currently ranked 7th in the world – together with Korea’s successful response to COVID-19, has served as a driving force for our economic rebound beginning in the third quarter.

“Celebrating the 57th Trade Day, I am truly grateful to our international traders for their hard work. My congratulations also go to all those honourees who received awards today.”

Some 1505 companies were awarded Trade Towers and 599 individuals received awards for their important contribution to exports.

Commenting on the award win, Mr. J.H Lee, the President of Nippon Paint Korea, paid tribute to his colleagues.

“I must take this opportunity to thank our customers and colleagues, all of whom have contributed to making this award possible. We achieved the silver trophy for our efforts in 2019, but now we have our hands on the top prize. Winning a 2020 Gold Export Tower, especially given the difficulties faced during the COVID-19 crisis, is a huge accolade for which we should all be very proud.”

Mr Lee furthered: “The high export volume is indicative of increased market demand for marine coatings capable of reducing fuel consumption and CO2 emissions. Coatings with a high solids content and low volatile organic compounds are key factors in helping ship operators reduce the impact of their operations on the ocean environment. We aim to continue our efforts to support demand for high performing, environmentally friendly coatings across our segments.” 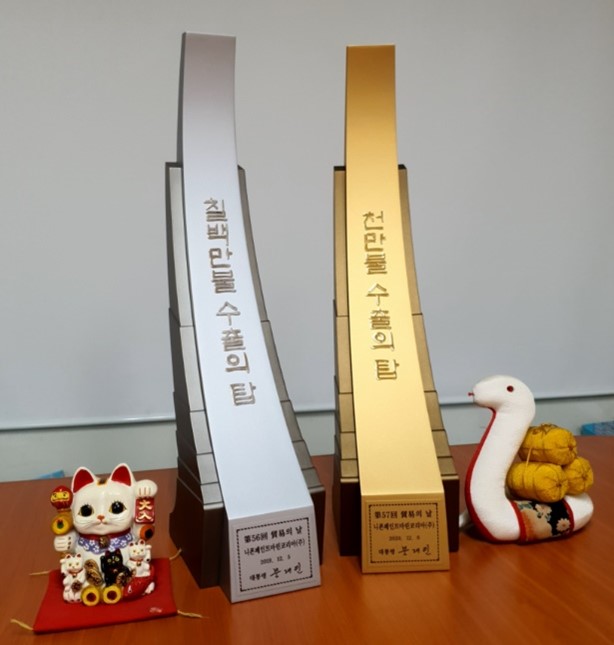