Designed to transport salt, iron ore, stone, and other bulk cargoes throughout some of the narrowest rivers in North America’s Great Lakes region, including the tight bends of the Cuyahoga River, the single screw Mark W. Barker is the 6th Interlake Steamship vessel that Thordon’s proprietary polymer bearings have been installed.

“Interlake has had a lot of success with our propeller shaft bearings,” said Jason Perry, Thordon’s Regional Manager, North America. “Their vessels operate in some of the region’s narrowest, shallowest waterways which means vessels are unable to turn and instead must reverse using bow and tunnel thrusters. When operating at lower shaft speeds, the RiverTough polymer formulation reduces friction and bearing wear. The material can also withstand operations in highly abrasive, very sandy environments.”

Wear rates for RiverTough are typically less than half that of rubber bearings based on ship owner feedback. Offering increased resilience, easier shaft alignment and less edge loading, lubricants in the polymer material reduce friction levels during nearly-dry starts, significantly eliminating stick-slip and vibration at low shaft speeds. Results from shipowners have shown wear rates of 0.075mm to 0.100mm (0.003in to 0.004in) in 6000 to 7000 hours of annual use.

Commenting on Interlake’s long-term relationship with Thordon, Ian Sharp, Interlake’s Director of Fleet Projects, said: “From the outset, Thordon always responds quickly to our requirements with its bearing expertise, technical know-how and customer service. Having multiple RiverTough bearings in operation with proven reliability made it a very simple decision to choose the same Thordon bearing for our new ship.”

With a hull optimized for energy efficiency the 28,000dwt River-class bulker is powered by a pair of 400HP main engines driving a single controllable pitch propeller through twin-input, single out-put reduction gearbox. It is the first ship to operate on the Great Lakes with engines that meet EPA Tier 4 emissions standards.

Craig Carter, Vice President Business Development added: “Mark W. Barker is truly a milestone ship for Interlake and we are proud to be associated with what is arguably one of the most advanced, energy efficient self-unloading bulkers to operate on the Great Lakes.

“Our relationship with Interlake Steamship and Bay Shipbuilding dates back to 1998 when we installed propeller shaft bearings to the 25,000dwt Kaye E. Barker.  Since then, we have enjoyed a very productive, collaborative relationship with both owner and yard and look forward to working together on future projects.” 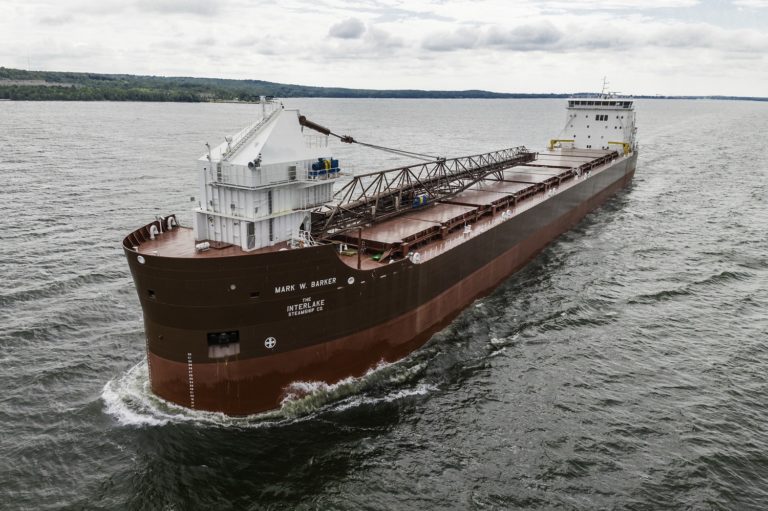 The Mark W. Barker, on her maiden voyage equipped with Thordon’s RiverTough bearings. (Photo courtesy of The Interlake Steamship Company)

Thordon Bearings designs and manufactures a complete range of journal bearing and seal systems for marine, clean power generation, pump, and other industrial markets. The bearing systems are manufactured using Thordon proprietary non-metallic polymer materials that are lubricated with water eliminating oil or grease usage, meaning ZERO risk of oil pollution to our rivers, lakes and oceans and elimination of lubricant costs.  Thordon systems and bearings are available worldwide through over 70 agents and distributors.