Global Survival Technology solutions provider Survitec has today received the inaugural MV Derbyshire Award from the Liverpool Shipwreck and Humane Society (LS&HS) for its Seahaven Advanced Evacuation Systems (AES). The award celebrates individuals, companies or organisations that have made an important contribution to maritime safety in the Northwest of England region.

LS&HS presented the award to Stew Gregory, the lead designer of Seahaven, at Survitec’s facility in Birkenhead, UK. Seahaven is the world’s largest inflatable lifeboat designed to evacuate up to 1,060 passengers in under 22 minutes while providing up to 85% additional deck space for cruiseship owners and operators to generate revenue.

The judges felt that Seahaven’s technology, including launching at the push of a button, deploying in under four minutes and travelling independently for 24 hours, was innovative and redefined the previously held concepts of maritime safety, especially for mass evacuation. It is also a hugely visible and significant statement of the importance of saving lives at sea.

Mr Jones added: “This pioneering approach to maritime safety reflects the values of the LS&HS, as it pushes the boundaries of life-saving.”

Receiving the award, Mr Gregory said: “Over the past 100 years, Survitec has demonstrated a commitment to innovation, investment and development of Survival Technology for those who rely and depend on it. We are extremely pleased to collect this award from the Liverpool Shipwreck and Humane Society in recognition of Survitec’s sole purpose. We Exist to Protect Lives.”

This inaugural annual award for maritime safety is named after the MV Derbyshire, a Liverpool ship that was tragically lost on 9 September 1980 during Typhoon Orchid, south of Japan. She is the largest British ship to have been lost at sea, with the deaths of 42 crew members, plus two wives. For decades, the MV Derbyshire families focused not just on justice for their loved ones, but on the wider issues of maritime standards and safety, seeking to ensure that no more innocent lives are lost at sea.

England’s Northwest region has been long renowned for both its shipping history and also its maritime innovation, and now the Liverpool Shipwreck and Humane Society, formed in 1839, has launched this award for which nominations will open again in June 2023. 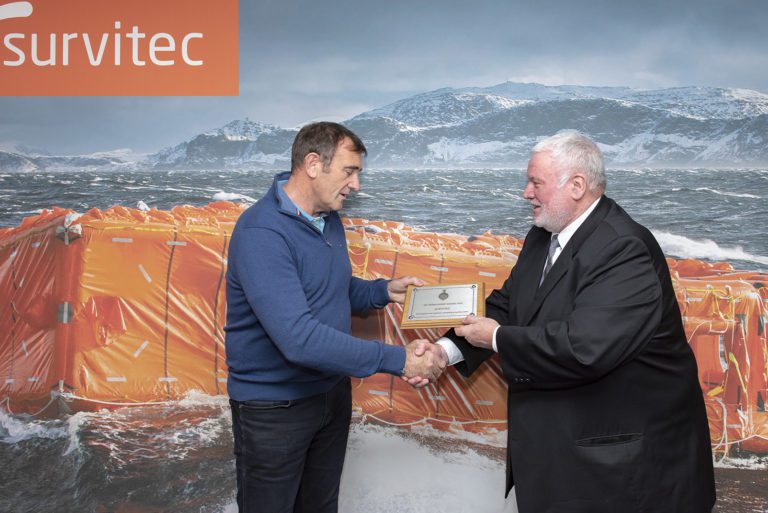 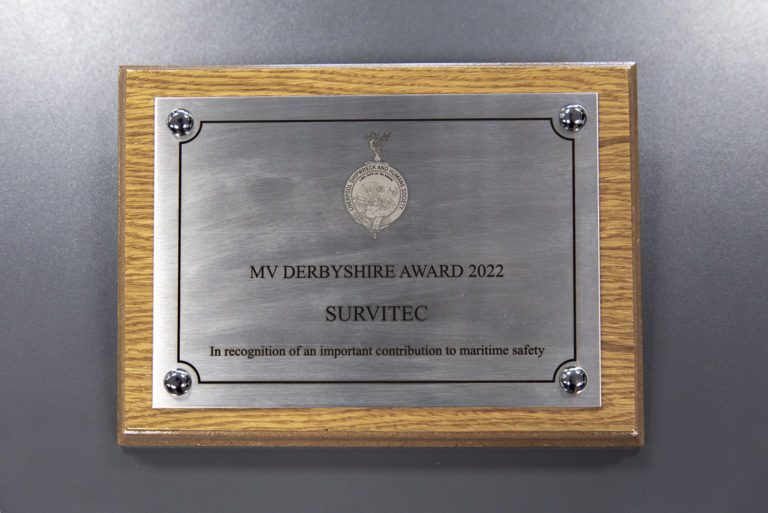 Survitec is a global Survival Technology leader to the maritime, defence & government, aerospace and energy sectors. Survitec has over 3,000 employees worldwide, covering 11 manufacturing facilities and over 400 service centres. They operate in over 2,000 ports, spanning 96 countries. Survitec are the world’s largest manufacturer and supplier of liferaft, Marine Evacuation Systems (MES) and offshore rental PPE. They are a leading supplier of fire solutions to the maritime industry and hold a market leading position for Pilot Flight Equipment in the aerospace & defence market. The Survitec team live by their purpose “We Exist To Protect Lives”. Throughout its 168-year history, Survitec has remained at the forefront of innovation, design and application engineering and is the trusted name when it comes to critical safety and survival solutions. www.survitecgroup.com

About Liverpool Shipwreck and Humane Society

LS&HS makes honorary awards of medals, parchments, certificates and letters of commendation to people who voluntarily put their own lives or safety at risk by saving or attempting to save others who are in danger in cases of shipwreck, drowning, fire or any other hazards. Since the Society was first formed in 1839 it has awarded over 10,000 medals, in gold, silver or bronze as well as a countless number of parchments, certificates and letters of commendation. www.liverpoolshipwreckandhumanesoc.org.uk.