ALBERT WEATHERILL: A STEADY HAND ON THE TILLER

After spearheading the company’s unprecedented growth for more than 40 years, culminating four-years-ago in the sale of the 135-year-old McAusland’s to Dutch firm Van Ameyde, Albert Weatherill is set to step down as Managing Director.

Weatherill traces his connection with seafaring back to the early 1960s when, at the age of four or five, he would stand at the entrance of Hull fish docks with his mother waiting for his father, a fishing trawler captain, to return from Icelandic waters with his crew. “I would have been passed over onto the deck and then found my way up to the bridge to see my dad, and watch as he navigated and manoeuvred the ship alongside.”

This was the start of a maritime life peppered with larger-than-life characters, major disasters and danger at sea. Several years as a merchant seaman led to a stint in his early 20s as chief officer on the world’s largest fishmeal factory ship off West Africa, where his brother Mike was already working.

“It was basically a floating money-making machine, and it was the most horrendous, dangerous place; a ship built for 40 people with 300 on it, knife fights, fires, leaks, sinkings. There were accidents on fishing boats with derricks crashing down – just one chaotic scene after another.”

He says that despite the sometimes horrific situations he encountered during this period – one of which included being a passenger in car whose driver had a machine gun in his lap – he was not put off the seagoing life. “You think, yeah, it’s bad, but it could be worse; you’re young and carefree.”

Change was ahead, however, in the form of redundancy, in 1982. “I was looking around for different things to do and somebody said, how about taking a job as a surveyor?”

During his initial interview for a trainee surveyor position with McAuslands, the oldest marine surveying and consulting firm in continuous operation in the Port of Hull, the 24-year-old thought that the company was looking for a middle-aged captain with years of experience.

“But after listening to my story about my seagoing career that had involved fire, death, terrorist attacks and working on ships with holes in, maybe they looked at me and thought, blimey, he’s perfect for this sort of thing – investigating things that go wrong. But perhaps the reality of it was they picked me because they could get me for 90 quid a week!”

Whatever the reason, Weatherill quickly found himself in an environment where his ability to investigate problems and look for resolutions in crisis situations was nurtured and valued. “I’d probably seen more in my two years on that factory ship than people would see in a lifetime working on a tanker or other merchant ship.”

The idea of corporate life did not appeal at first. “Only three people worked there at that time and I’d be the fourth. It was all Dickensian rolltop desks and Bakelite phones, and I thought yeah, okay, I’ll give it six months and then I’ll find another ship somewhere and get back to doing what I do. And all these years later, I’m still here and thinking I’ll give it another six months!”

So, what kept him at the company all those years? “I fell in love with the variety of work that surveyors do,” he explains. “A lot of the time you are fighting fires and so when the alarm bell rings, you’ve got to go. If that coincides with plans for the weekend or a holiday or anniversary so be it. You need to go and sort it out. So, it takes a certain person that’s capable of doing that. And that was me.”

A combination of good mentoring and a voracious appetite for books and learning saw Albert rapidly expand his knowledge of the sector. His brother Mike joined the firm during the 80s and together, they helped modernise working practices and expand the company to become one of the industry’s foremost marine consultancy, claims handling and surveying firms.

In 1992, the McAuslands board appointed both Weatherills as directors of the company, which continued to expand and was employing seven surveyors by 1995. In 1997, following the then MD’s retirement, Weatherill took on many of his responsibilities, finally being confirmed as MD himself in 2008.

In 2012, Lloyd’s approached the company seeking its survey services for the Lloyd’s market and the wider global insurance market using Lloyds approved agents. “They gave us all of their previously held areas on the east coast that were mostly held by shipping agents,” says Weatherill. Further growth ensued as a result. “We were rapidly becoming a much more prominent force in the world of surveying, with five or six subsidiaries.”

By 2018, the company’s successful growth had not gone unnoticed by bigger players in the market. “Interest was being shown in acquiring us,” says Weatherill. This trend coincided with his brother’s wish to retire – which only an acquisition could facilitate.

Serendipity played her hand when Dutch firm Van Ameyde, looking to expand into the UK, vied the company with interest. “A deal was struck, which allowed my brother to retire and kept me on as managing director of Van Ameyde McAuslands.”

Now in his 65th year, after driving the company’s growth for more than four decades, he believes the time is right to hand over the reins to the next generation.

“This is a good time for someone a bit younger to pick up the baton, hopefully with a similar entrepreneurial spirit, to take the McAuslands side of Van Ameyde Marine onwards, outwards and upwards,” he says. “We are now a team of almost 40 with national and international offices. A million miles from where we were in 1980s.”

So, what’s next for Weatherill when he does retire? “I’d like to remain in the background in an advisory/consultancy role,” he says. “I’ll still be around if they want me to attend events or undertake an expert witness case in my speciality area, which is steel products.”

Looking back on his long career, he says: “40 years seem to have passed in the blink of an eye. I feel very privileged to have worked in this fascinating industry and been on so many ships. There is something about being on a ship at sea that leaves an indelible salty mark on the soul that only seafarers really understand.

“This is something my successor knows only too well.  As the company’s new Managing Director, Jeff Wilson is well placed to drive the company further forward on its trajectory. With 37 years’ experience in marine and technical operations, the tiller is with a steady hand.” 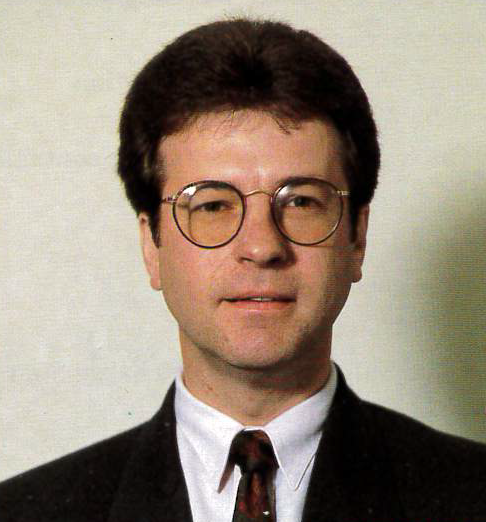 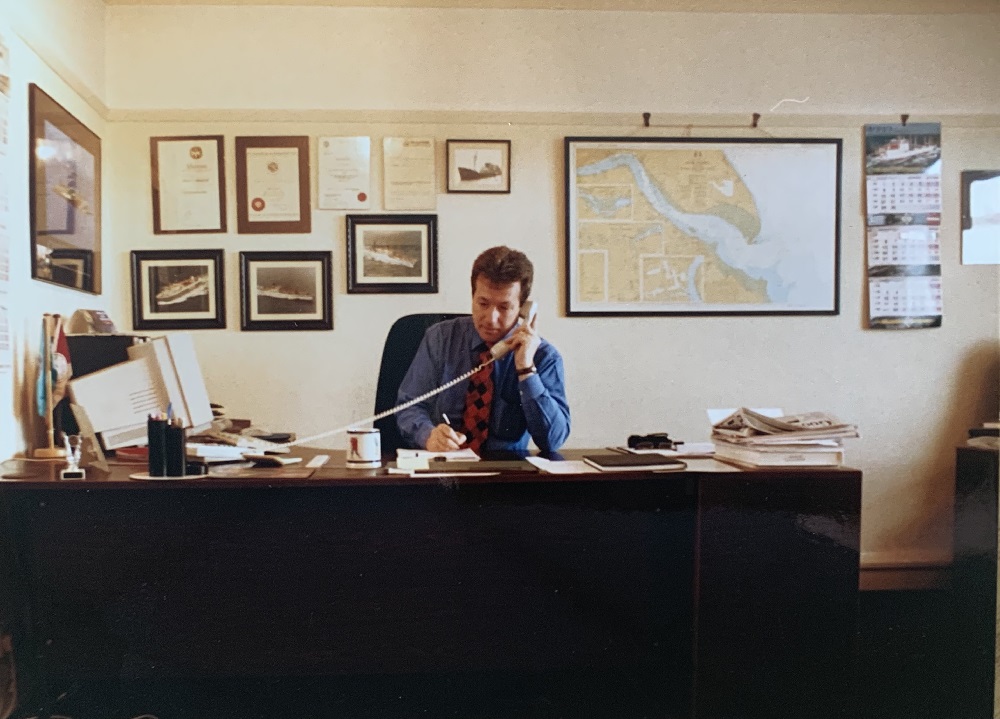 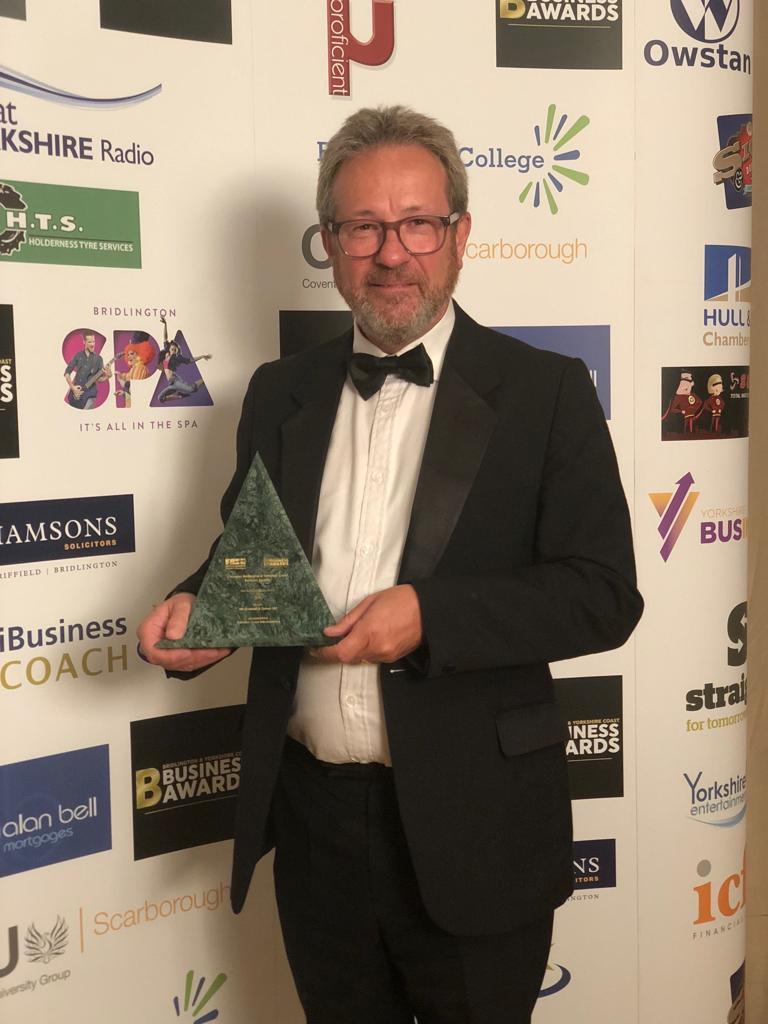 Albert Weatherill: Then and now